However, there were other aspects to Trump's engagement with the Russian authorities. One which had borne fruit for them was to exploit Trump's personal obsessions and sexual perversions in order to obtain suitable 'kompromat'  (compromising material) on him. According to Source D, where s/he had been present, Trump's (perverted) conduct in Moscow﻿﻿﻿﻿ included hiring the presidential suite of the Ritz-Carlton Hotel, where he knew President and Mrs. Obama (whom he hated) had stayed on one of their official trips to Russia, and defiling the bed where they had slept by employing a number of prostitutes to perform a 'golden showers' (urination) show in front of him. The hotel was known to be under FSB control with microphones and concealed cameras in all the main rooms to record anything they wanted to. -- from a widely circulated raw intelligence dossier on Donald Trump compiled by a former member of British Intelligence 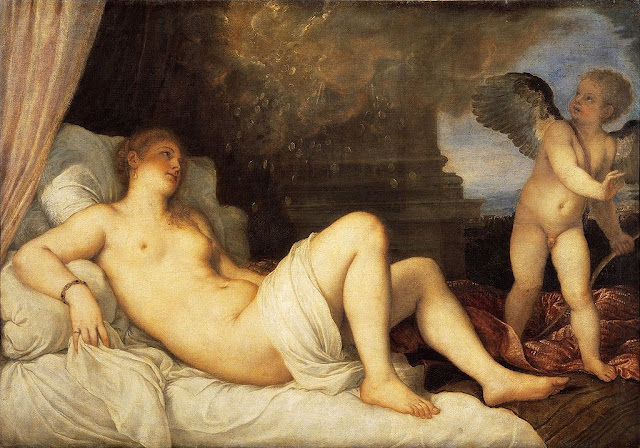 According to my sources O (also known as Ovid) and T (aka Titian), Zeus seduced Danae--thus fathering the hero Perseus--by concealing himself in a shower of gold, a scene richly imagined by the Renaissance master as a waterfall of Trump-friendly doubloons. Alas, the pile of half-sentient cowflop that will raise its hand (while defiling Lincoln's Bible with the other) at the Capitol on Friday likely had no classical allusions in mind when he took himself in hand and stroked the soon-to-be First Member while watching 'a number' (two? five? thirty-six?) of Putin's Finest micturating for his erotic edification. I knew Trump was going to be a piss-poor president, but even I didn't expect him to be a piss-porn one. If such a story had circulated concerning President Obama, it would've been dismissed out of hand as disinformation, another product of the right-wing hate machine; with Trump, however, piss like this seems completely in character. And the dude's press conference defense ("I'm a germophobe.") marks the Piss-Prez as the kind of perp police detectives love to encounter in the interrogation room: the kind who volunteers incriminating information because he's so ignorant he thinks it's exculpatory. A germophobe is exactly the sort of person most turned on by scat porn, because it activates his deepest taboos; for Trump, piss is the ultimate forbidden fruit juice.

All of which leads me back to Philip Roth's 50+ year-old line about American reality beggaring the imaginations of its novelists. In our present Trumptime, Roth's argument sounds rather quaintly understated. Trumpian reality exceeds even the weirdest and most excessive of novels. His administration is going to be like Gravity's Rainbow rewritten by a committee of schlockmeisters--imagine Trump as Brigadier Pudding celebrating his inauguration by hiring two DC crack whores for a golden shower show in the Lincoln bedroom; worse, Trumperika might be a fascist synthesis of 1984 and The Handmaid's Tale, with Don the Con as our gaslighting Big Bro, holding massive rallies to convince his followers that slavery is freedom (an easy job, since few Americans have any idea what freedom means; we ain't no intellecshul country; we ain't readin' no Gene Pool Sartrees), while fruity, loopy Mike Pence, Indiana's fetal funeral fanatic, sets himself up as America's Ceausescu. (Check out Romanian director Cristian Mungiu's excellent film 4 Months, 3 Weeks and 2 Days for a glimpse of what Pence's ideal America might look like.) The high point of Friday's inaugural festivities might come when the newly sworn-in Trumpenfuhrer (Can we, just this once, swear the bastard in with actual swear words? I intend to.) orders the Rockettes to piss all over the Mormon Tabernacle Choir. The 4-8 year Trump Urine Stream will all run downhill from there.

Enjoy the last two days of the Obama administration, because after Friday at noon (a blood meridian indeed) we'll be living inside a Chinese curse: interesting times.
Posted by BRIAN OARD at 9:17 PM

My books Beauty and Terror and The Degas Manuscript are now available for purchase as Kindle e-books at Amazon.com.

Brian A. Oard is the author of a collection of art criticism, Beauty and Terror: Essays on the Power of Painting, and a historical mystery novel, The Degas Manuscript. (Click on the titles to read them online.) He is also the creator of the epigrammatical blog Epigrams for Atheists. He lives in the United States, loves London and Paris, and enjoys the cheap objectivity of writing about himself in the third person. He can be contacted by email at baoard@aol.com.